Giving Tuesday has become a global generosity movement with 70 countries taking part worldwide. This year’s Giving Tuesday will take place on 30 November 2021 – and the evidence suggests that nonprofits running Giving Tuesday campaigns are boosting their end of year fundraising income.

Last year, in the UK alone, over £20m was donated to good causes via Visa for Giving Tuesday – that’s more than £14k every minute! However, research by Third Sector and Salesforce.org has found that less than a third (29%) of charity and nonprofit professionals surveyed were actively running Giving Tuesday campaigns but 59% agreed that it was a day they needed to make more use of.

Given the extraordinary financial and operational pressures that nonprofits have faced over the past 18 months, maximising your fundraising efforts, and harnessing the general public’s generosity and community spirit has simply never been more important. So could Giving Tuesday help you end this year’s fundraising campaigns on a high note?

Third Sector's Editor Emily Burt hosts an hour-long webinar talk with Andy Frain of the Charities Aid Foundation and speakers from nonprofits who are making the most of Giving Tuesday, in partnership with Salesforce.org. They’ll be discussing: 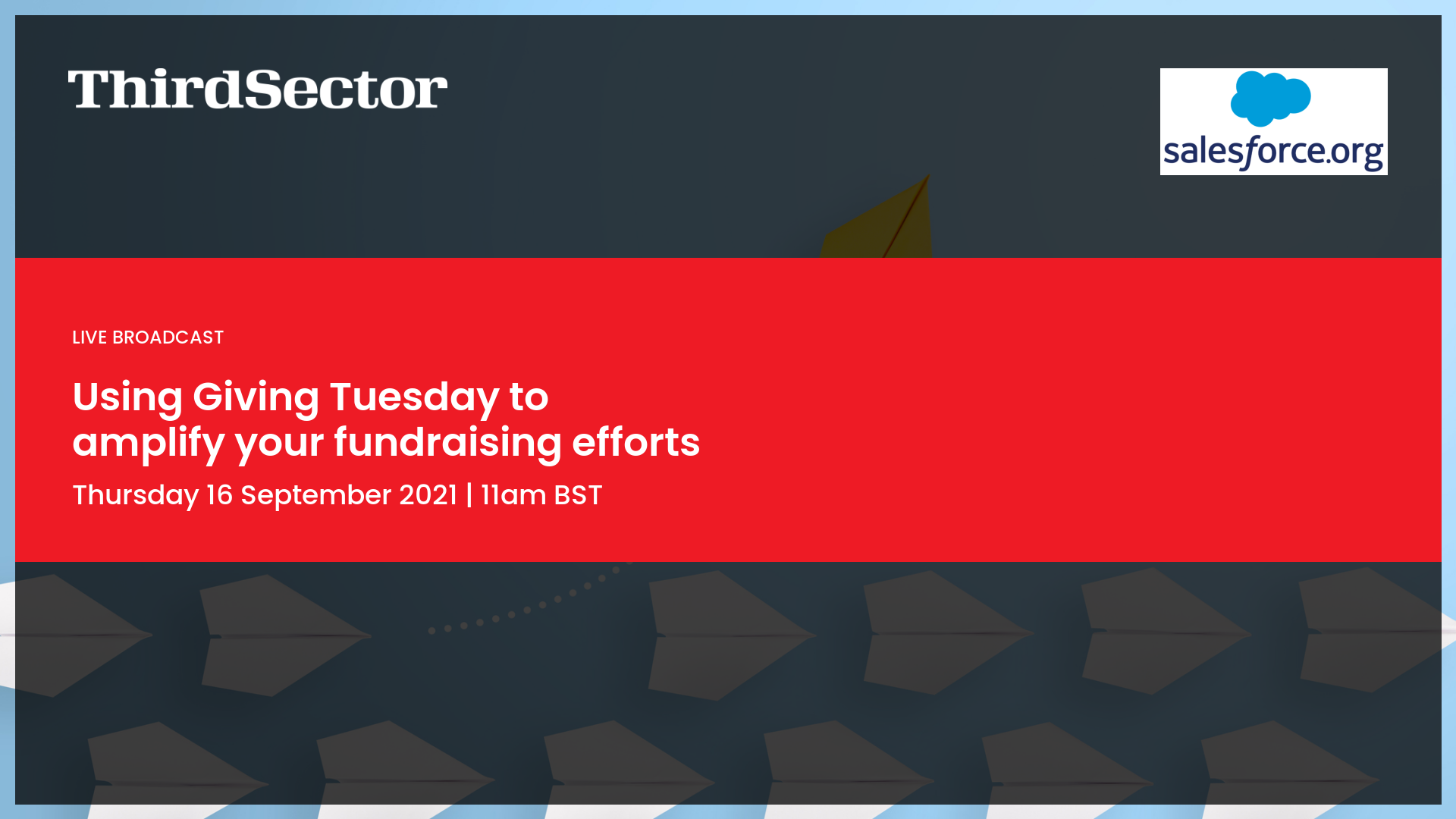 Alex joined the Big Give as Director in 2015. The Big Give is the UK's biggest digital match-funding platform, and has raised over £160m for not-for-profit organisations since 2008. Alex manages the relationships with the Big Give's match-funding "Champion" partners which include Trusts & Foundations, Companies, HNWIs and Public Funders. During his tenure, he has led on a number of high-profile match-funding campaigns, including raising £2.6m following the Grenfell Tower fire, and has grown the size and impact of the Big Give's flagship campaign, the Christmas Challenge, from £7.2m raised for 258 charities in 2015 to £20.1m raised for 764 charities in 2020.

Alex has spent the majority of his career in the not-for-profit sector. He has worked for a number of international development and humanitarian NGO's including Tearfund and Medair. He recently completed a one-year secondment to REED as Director of Social Impact. Alex holds a BA Hons in Business & Geography from Exeter University and MA in Charity Management from St Mary's University which included a thesis entitled 'Impact Bonds: The future of disaster resilience funding?'. He is Vice-Chair of Excellent Development, an international development charity specialising in water conservation, and lives in Surrey with his wife and young son.

Andy Frain is the Campaigns Manager at the Charities Aid Foundation, who have been the Global Partner for Giving Tuesday since it arrived in the UK in 2014. Since then CAF has supported the growth of the campaign which now has thousands of partners in the form of individuals, charities and businesses all over the country.

Joanna has worked at The Wildlife Trusts for the past three years, mostly in her current role, but also dabbled in public-facing campaigning work at the start. She built up her experience of communications and marketing for environmental charities within the wider Wildlife Trust movement, starting off with Yorkshire Wildlife Trust after studying environmental science at both Edinburgh and York universities. During her undergraduate degree at Edinburgh, Joanna was able to pick up some of the theoretical side of marketing and has enjoyed combining this knowledge with a passion for the natural world; wishing to drive positive change for both nature and climate – and therefore ultimately people! Career highlights have included the production of film trailer ‘stunt’, The Wind in the Willows, to drive wider awareness of nature loss and the publication of the UK Peatland Strategy whilst working with the IUCN UK Peatland Programme, which has sparked investment and government commitments to its restoration. Joanna also loves connecting people with nature through Wildlife Trusts initiatives such as 30 Days Wild and the new Big Wild Walk fundraiser.

Dan McNally is Head of Regional Development at Muscular Dystrophy UK, a charity supporting the UK’s 70,000 people living with muscle-wasting conditions. Since 2015, the community-based fundraising team have tried different approaches to harness the potential of Giving Tuesday. Last year they used the Giving Tuesday focal point to drive warm supporters to their Big Give Christmas Challenge. With help from their President, Gabby Logan, Muscular Dystrophy UK raised £93,000 from the initiative.

Jorge Minguell is Success Engagement Director at Salesforce.org. He helps non profit customers across Europe to succeed in their digital transformation initiatives. Previously, he worked as Digital Fundraiser Manager for the International Committee of the Red Cross, UNICEF and International Rescue Committee